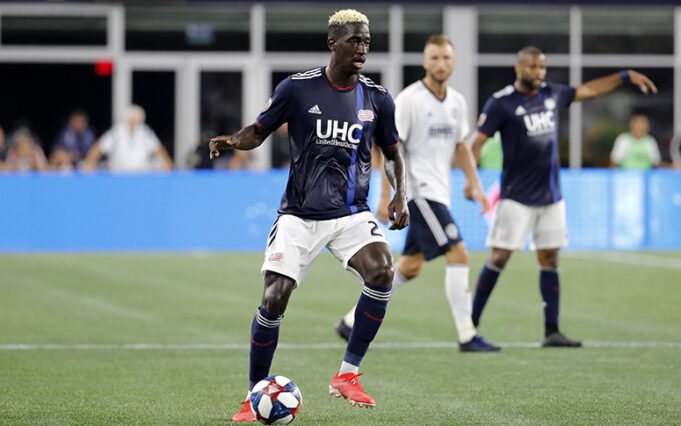 Zahibo, who currently plays for Dundalk in the Irish Premier Division, made his comments despite Kondogbia starting just four league games as his Spanish side Atletico Madrid won La Liga.

The 28-year-old Kondogbia played in a total of 25 La Liga games as Atletico claimed their first Spanish league title in seven years and the midfielder often proved effective at helping the Rojiblancos close out narrow games.

His compatriot Zahibo, who played in the Spanish top-flight under Gary Neville at Valencia, feels that his international teammate could be a future African Footballer of the Year.

“I think he can be in the discussion even now for sure,” Zahibo, who also had a stint in MLS with New England Revolution and Houston Dynamo, told BBC Sport Africa.

“Obviously we have some guys like Mahrez who are in a special dimension but we should definitely talk about Geoffrey too. For me, he’s one of the best midfielders in Africa and maybe the world.”

Zahibo, 27, and Kondogbia were both born in France and met playing youth football at Lens, with the former eventually persuaded to play for the Central African Republic by his friend and now international captain.

“We have had a good relationship for some time and he is a great guy to be around. He helps everybody and is the leader of the team, on and off the pitch,” Zahibo added.

“Obviously playing in Spain he has put Central Africa on the map and is helping to push football forward in the country.

“For me, he is part of the elite and hopefully with him we can do something unique and make some people proud in Central Africa.”

That ‘unique’ achievement would be eligible for the Africa Cup of Nations, something that CAR has not yet managed in their history.

Having seen the likes of Madagascar and Comoros recently reach the tournament for the first time, Zahibo is hopeful that CAR can join the ranks of Nations Cup debutants soon.

“We have to change the mentality because for so many years we didn’t win anything or even compete in a good way,” he explained.

“It absolutely motivates us to see these new countries playing at Afcon. There is a new generation, a new wave in African football, and we want to be part of that.

“Players like myself and Geoffrey are trying to be the bridge for Central Africa – helping those who play locally reach a higher level, to show that we can play in the Africa Cup of Nations.”

A nation in turbulence

Life has been difficult for the pair’s CAR-based teammates of late as the country remains amid a near decade-long civil war.

That politics has permeated football in that time is perhaps not surprising but there have been some genuinely shocking revelations in recent times.

None more so than the charging of former Central African Football Federations chief Patrice-Edouard Ngaissona with war crimes and crimes against humanity, including murder, rape, persecution, and torture.

“Of course I have heard about it and yes it is hard to hear,” Zahibo expresses.

“I can’t tell you much about what I think about this man.

Unlickly you have corruption everywhere and you have bad apples everywhere.

“From what I know, people are trying to change things for the better and the federation is focused as it should on football. The country wants to push football forward and this is good for Central Africa because it is an amazing country.

“People see the news but I have seen with my eyes as I had the chance to go every year with my family.

“There is poverty and struggle but there is also great beauty and the people are incredible. We want to do great things for them.”

On the pitch, the outlook certainly appears more positive. Just this February, CAR reached the quarter-finals of the 2021 Under-20 Africa Cup of Nations in Mauritania before losing to The Gambia, who finished in third.

Next up for the senior side and coach François Zahoui, who previously led Ivory Coast and Niger, are the 2022 World Cup qualifiers starting this September with CAR drawn in Group C along with Nigeria, Cape Verde and Liberia.

“The coach is doing a lot to change the mentality, to make people think that we can do it, and to ask the federation to invest more and change the culture around football,” Zahibo explains.

“For World Cup qualifying, we are realistic. Nigeria is obviously the biggest team in the group but the magic of football is you never know what will happen and of course, we want to show we can compete with one of the best teams in Africa.

“Moreover, for us the goal is to qualify for Afcon in the next two to four years. We believe we can do big things together but it’s important to remember that this project is a long-term one and we are still in the early stages right now.”

Finding his feet back

At the club level, Zahibo has had an inconsistent few years. After being handed his Valencia debut in a Copa del Rey match under ex-Manchester United captain Neville, things did not work out for him at the Mestalla and Zahibo moved to Segunda side Gimnastic.

“I am always very grateful that Gary Neville gave me the opportunity to play for one of the biggest clubs in Spain and he was a very good coach so it is a shame things didn’t work out for him,” Zahibo explained.

“There were some fantastic players at that time, like Dani Parejo who is now at Villarreal. He’s just a different class of player, so technical and mentally very strong – he was really one of the best I’ve played with.

“Just three months after I left Geoffrey [Kondogbia] called me to say he was moving to Valencia. It is sad that we didn’t get to play together there but now we are together when we play for Central Africa so it’s all good.”

Zahibo swapped Spain for the United States in 2018, joining another Premier League legend, Brad Friedel, at New England Revolution. Three years in the MLS with New England and Houston Dynamo gave the France-born midfielder the opportunity to play more regularly.

“It was an unbelievable experience and I learned a great deal from my time in the States. Like Gary Neville, Brad Friedel had more of an English mentality as a coach, a focus on fighting spirit and not just technical skill. This is something I have now developed and I think it is missing from Spanish football.”

In May, Zahibo signed for Irish side Dundalk and will likely have to tap into that fighting spirit week in, week out in the League of Ireland.

Dundalk duelled with Arsenal and Molde in last season’s Europa League and the prospect of European football was a key factor in the Central African’s return.

“This is exactly why I moved to Dundalk. I feel it was an excellent opportunity to get back to Europe and this was relevant as I have been away from my family in Spain since the pandemic started,” he stated.

“Getting back to one of the top leagues is my in. I just want to focus on playing and having a lot of minutes this year. My goal is to play at the highest level I can and I believe I can make it to those big European leagues again.”

5 Craziest Sports around the Globe