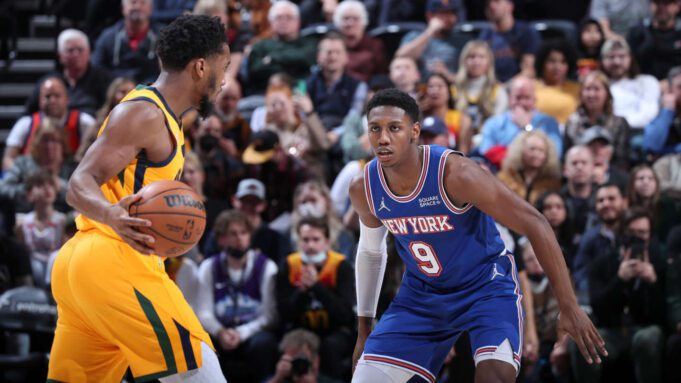 Now that Kevin Durant and the Nets have (at least temporarily) resolved their differences and plan to move forward together, the eyes of the basketball community have shifted to Donovan Mitchell and the Jazz.

Utah firmly entered a rebuilding phase when it sent Rudy Gobert to Minnesota in a blockbuster trade earlier this summer. That deal seemed to be a precursor to a Mitchell trade, but with the start of the 2022-23 season fast approaching, the three-time All-Star guard has not yet left Salt Lake City.

It has long been assumed that the Knicks will eventually land Mitchell, as they have been attached to the New York native since mid-July. However, The Athletic’s Tony Jones reported on Thursday that a Knicks-Jazz trade isn’t “imminent,” and Utah has “begun fielding offers from other teams.”

While that is an interesting wrinkle to the Mitchell conversation, Knicks fans shouldn’t be too concerned. New York remains the team to beat.

The Jazz have received multiple offers from teams other than the Knicks that they find “intriguing and worth pursuing,” per Jones, who also reported that Mitchell’s wish list includes the Knicks, Nets and Heat. (To be clear, Mitchell hasn’t formally requested a trade. Those are just his preferred teams if Utah does decide to move him.)

New York has a significant advantage over Brooklyn and Miami in terms of trade assets. The Knicks have young, talented players (RJ Barrett, Quentin Grimes and Obi Toppin) and can ship out up to eight future first-rounders (four of their own and four from other teams).

There are also specific complications with potential deals involving the Nets and Heat. Brooklyn can’t have Mitchell and Ben Simmons on the roster at the same time because of NBA rules regarding players who have signed max rookie extensions. Utah reportedly asked Miami to bring in a third team because the Jazz don’t believe the Heat can offer sufficient compensation on their own.

The Hornets and Wizards have also been floated out as Mitchell suitors, and there is always a chance that another mystery team will ramp up its pursuit of a Mitchell trade. (The Cavaliers reportedly “touched base” with the Jazz about a Mitchell trade but have since removed themselves from the equation.) Any front office would struggle to top the Knicks’ best package, though.

It makes sense that Utah would engage in discussions with other teams in order to drive up the asking price for Mitchell, but at this stage of the offseason, New York is still the most logical landing spot.

Step by step on how to start a sports blog 2022

Is this the termination of an era for LeBron James, one...