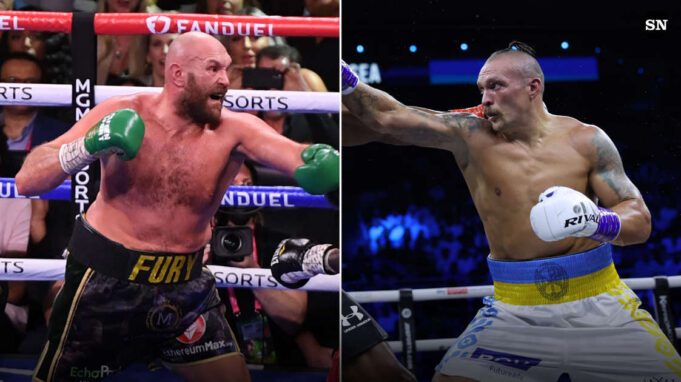 As two unbeaten fighters carrying all of the major world heavyweight belts, Tyson Fury and Oleksandr Usyk are on a collision course towards one of the most anticipated bouts in the history of boxing.

Even before Usyk’s second win over Anthony Joshua — the man seen by many as the main candidate to fight Fury — there had long been talk of the two supremely skilful champions facing one another.

Speculation has intensified since the Ukrainian beat Fury’s fellow Briton, fuelled by the fighters and their promoters.

What’s the latest on the possible showdown? Where will it take place? How much will each man earn? Here’s what we know so far.

Fury vs Usyk: The latest on the fight

Speaking immediately after defeating Joshua with another spectacular display in Jeddah on August 20, Usyk said he is “not fighting at all” if he does not meet Fury.

The biggest development since then has been Fury issuing a deadline of the end of the month to make the fight happen for £500 million ($850 million).

“For all these suitors out there that want to make the fight, I’m going to give you all seven days — until September 1st — to come up with the money,” Fury blustered on social media. “If not, thank you very much, it’s been a blast, I’m retired.”

By Fury’s bewildering standards, the idea seems relatively coherent with his previous insistence that he would fight for the huge sum or end his career.

Tyson Fury and Oleksandr Usyk are set to fight next according to widespread reports 🥊 pic.twitter.com/pEIIVpVqee

Sharing footage of the screen on which he was watching Usyk retain his titles, Fury said during the fight: “I’ll be honest with you, guys: I was watching that and both of them were s***.

“It was one of the worst heavyweight title fights I have ever seen. I would annihilate both of them on the same night. Get your f****** chequebook out because ‘The Gypsy King’ is here to stay forever.”

Four months is a quick turnaround for a stadium heavyweight title fight, not least when Usyk has just taken part in a 12-round battle against Joshua.

That’s the timeframe for Fury and Usyk to meet, though, according to the Mancunian’s American promoter, Frank Warren.

“This fight needs to take place by the end of this year,” Warren explained to Seconds Out.

“Otherwise Usyk’s going to get into mandatories being called and, legally, there will be a problem with various organisations. So, we’ve got to get it on.”

The situation is further complicated, Warren said, by the football World Cup in November and December, which will make arranging pay-per-view TV dates more difficult.

Fury vs Usyk venue: Where will the fight be held?

Saudi Arabia is the most lucrative option for all parties involved in the fight, and Usyk clearly enjoyed fighting there for the first time, arguably beating Joshua more comfortably than the split decision result suggested.

Fury and Joshua had agreed to a fight in Saudi Arabia in August 2021 before Deontay Wilder intervened through legal action, forcing Fury to fight him for a third time in a victory he earned in the US.

💷 “This fight is purely about money.”

👀 “If they want me to fight this unknown quantity they have to pay for that.”@Tyson_Fury reveals he would fight Usyk… but it will take a 𝙝𝙪𝙜𝙚 amount of money! 🤯 pic.twitter.com/g9NEApnBcM

Usyk first fought Joshua in England when he earned a wider points win over the Londoner at the Tottenham Hotspur Stadium in September 2021.

When negotiations for the rematch began, Usyk’s promoter, Alexander Krassyuk, said the options being discussed were the UK, Ukraine and the Middle East.

His client said he would “love” to fight at the Olimpiyskiy Stadium in Kiev, a 70,000-capacity setting that was a venue for several matches including the final when Ukraine co-hosted Euro 2012.

British former three-weight world champion Amir Khan, who has emerged as an unlikely go-between in arranging the fight, has hinted that it could take place at Wembley Stadium or in Saudi Arabia.

The national stadium of his homeland might appeal to Fury after he knocked out Dillian Whyte in front of a sell-out 94,000-strong crowd at Wembley in April 2022.

“Everyone’s saying, ‘why don’t we go down to Cardiff?'” said Warren, with the Welsh capital’s 74,500-capacity Principality Stadium an option if that did happen.

“Cardiff just isn’t big enough and we can’t generate the income there that we can at Wembley, which is the natural home for it.

“So, we’ve got to look abroad. There’s the Middle East and a couple of other places that we’ve had some loose conversations with.

“The financial expectations of both fighters means that we’ve got to take it to somewhere that wants to host the blue ribbon event.”

Which belts do Fury and Usyk hold?

Usyk won the WBA (Super), IBF, WBO, and IBO heavyweight titles from Joshua in London and collected the vacant The Ring belt when he beat him in Saudi Arabia, picking up the strap Fury had vacated amid his retirement talk in August 2022.

The WBC had given Fury a deadline of the end of August to confirm whether he would be competing for the title again. Warren said Fury did so in writing.

“To get those four belts on the line is something special,” added Warren. “It’s boxing’s World Cup final.”

Fury vs Usyk purse: How much will each fighter earn?

Fury may not be willing to split his stratospheric £500m price with Usyk if his previous comments about the 35-year-old are any indicator.

Smack-talker Fury has variously claimed that Usyk is still a cruiserweight — where the former Olympic champion spent much of his career before stepping up — and does not interest fight fans enough to justify the scrap.

Usyk was said to have taken a 50-50 split of the reported £65.4m purse for his rematch with Joshua.

Frank Warren has declared that Tyson Fury vs Oleksandr Usyk for the undisputed WBA, WBC, IBF & WBO heavyweight titles will be a 50/50 purse split between the two world champions. [@talkSPORT]

When he publicly offered to “sign the contract” to fight Joshua, Fury argued that “no money is to be made out of this British historic fight if it happens”.

“The fight’s got to be for free,” he suggested. “Free-to-air television and all tickets go for free.

“There’s the terms. I’m in the driving seat, take it or effing leave it. The ball is in your court, guys. Either way, I don’t give a damn.”

Team Usyk would undoubtedly feel differently about the riches to be made from a fight with the man who is arguably the greatest ticket and pay-per-view seller in the sport.