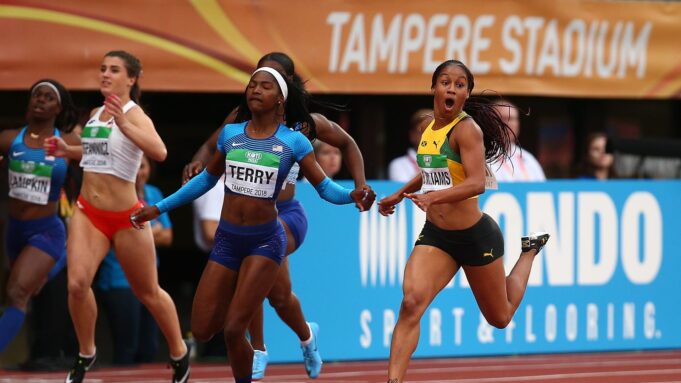 Jamaica have got the world’s fastest runners. In the past decade most of the sprint events have been dominated by male and female runners from the Caribbean island. Usain Bolt, Asafa Powell and Verona Campbell-Brown are among Jamaica’s world record holders and Olympic gold medalists.

Running has changed in Jamaica. In former times sprinters were poor people who came from the slums. When they saw they had talent they got scholarships at American colleges. They experienced world class training there but, nonetheless did not feel at home. Today, Jamaica has the money to employ top coaches, so Jamaican sprinters stay at home. Here they are more relaxed and can perform at their best.

In Jamaica, children begin to run at a very early age. When they get to school teachers and athletic coaches watch them run and walk. Then, depending on their talent they are sent to track and field clubs.  Most of the country’s world class runners began in the two leading track clubs. At school track meets crowds of teenagers get together to compete with each other. Running is very important in Jamaica and winning a national title or a school championship is something really big. A tough competition may be one of the reasons Jamaicans are so good.

Another reason for Jamaica’s success on tracks around the world is food. A typical breakfast includes salt fish with yams, bananas and maybe a cup of tea.  It contains carbohydrates which runners need to perform well. Nutritionists argue that the diet of Jamaican children is one of the keys to success.

Jamaican athletes are also have different body structure than non-blacks. They have long legs and little fat. Their narrow hips allow them to lift their knees higher when they run. Many scientists have been researching African and Caribbean runners in order to find out if they have a special gene that makes them faster than the others. However, there is no evidence of such a gene.

The success of Bolt, Powell and others has triggered hype among Jamaican children. These are their idols and they want to be just like them. Hard training and iron will is essential to be among the best in the world.

UEFA declares the removing of away goals rule in all European...