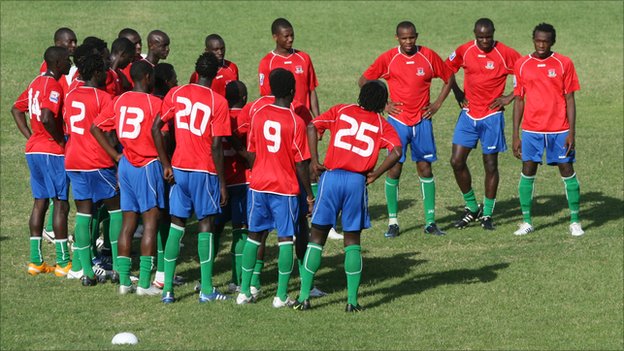 The Gambia’s national football team has avoided a meeting with the country’s President Adama Barrow in a row over their bonuses for qualifying for the Africa Cup of Nations finals.

The players have written to The Gambia Football Federation (GFF) president Lamin Kaba Bajo to decline the invite to meet the president on Monday.

The GFF has not responded to BBC Sport Africa’s attempts to get a response to the letter sent by the squad.

At the meeting, the players were expecting President Barrow to hand over 11 million Dalasi (approximately $215,000) to be shared amongst all the players and backroom staff involved in The Gambia’s debut qualification for the Nations Cup.

The squad does not feel the money reflects the magnitude of its achievement and is also concerned that accepting the money will set a precedent for the future.

“The team would like to thank His Excellency for the invitation but would kindly reject the invitation to meet and the money is given,” the letter explained.

“For the players, playing for The Gambia has never been basically about money. Instead, it was always about flying the Gambian flag higher and making the Gambian people proud.

“The players had always been glad to answer calls to play for the national team without expecting or asking for anything in return, not minding the difficulties that sometimes come with it.

“Football is a game of incentives. Having been chosen as one of the eligible people to compete in next year’s Africa Cup of Nations for the first time in Gambian history.

“The team deserves to be given a bonus that would motivate the players and every child who dreams of playing for the Gambia someday.

“The team feels that the respect and motivation given to the players fall below what it is meant to be. As a result of that, the players unanimously rejected the invitation.

“If the GFF accepts the advance, it would not be doing so on behalf of the players.

“We hope that henceforth the players would be given enough motivation as the preparations for the African cup continue.”

The Gambia tried to qualify for January’s Nations Cup finals in Cameroon by completing top of their group ahead of Gabon, DR Congo, and Angola.