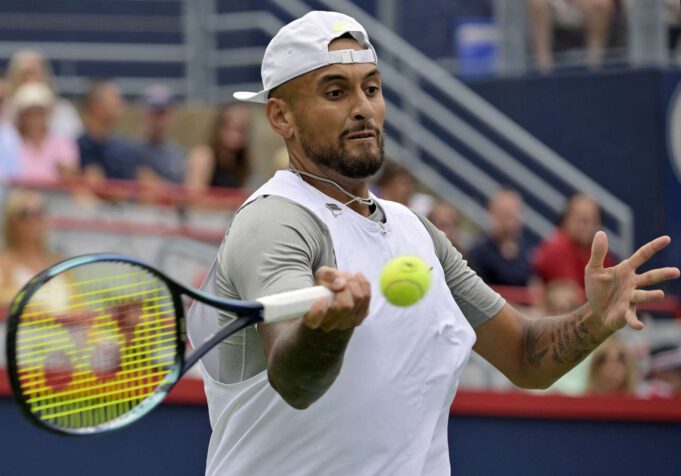 Enjoying a superb run of form, the loss was Kyrgios’s first since falling to Novak Djokovic in the Wimbledon final.

Since then the 27-year-old has been on a roll, including a title at the Citi Open, before running into Hurkacz who improves his record to 2-0 against the Australian following a three sets win earlier this year in the Halle semi-finals.

“Nick has been playing really unbelievable throughout the past few months,” said Hurkacz. “Battling against him, it’s very challenging, but it’s also fun.

“He can make every single shot. He doesn’t really have that many weaknesses, if any. I was just trying to serve good and stay aggressive.”

Hurkacz will next face Norwegian fourth seed Caper Ruud who strolled into the last four by sweeping aside sixth-seeded hometown favourite Felix Auger-Aliassime 6-1 6-2.

Kyrgios shrugged off the end of his winning streak, saying in his usual blunt fashion that he could not care less and was more interested in getting home after the U.S. Open to see his mother and father, who are not well.

“I honestly don’t care,” said Kyrgios, adding that he would head to Cincinnati as soon as possible where he will continue his build-up to the U.S. Open. “I’ve been away from home, away from my mum, away from my dad.

“They’re not very well at the moment.

“So I don’t really care about ‘no winning streak’.

“I got two more tournaments (Cincinnati and the U.S. Open)left before I can go home.”

The two big servers pounded away at each other on Centre Court with Hurkacz blasting 20 aces and Kyrgios hitting back with 19 in a contest that produced two breaks, both going to the Pole in the final set.

Kyrgios started the match serving at a quick-fire pace as the opening set reached a tiebreak in 33 minutes with Hurkacz winning it.

After holding serve to open the second, Kyrgios had a superb opportunity to take control with triple break point but was unable convert.

Hurkacz would also have his opportunities but could not get the elusive break as the second set again sped to a tiebreak -this time won by Kyrgios who clinched the set with an ace.

What had been a tight contest suddenly turned in the third when Hurkacz, helped by a pair of Kyrgios double faults, secured the first break.

With the help of yet another Kyrgios double-fault Hurkacz broke the Australian again to go 5-1 up and held serve to book his place in the last four.

(Reporting by Steve Keating in Toronto; Editing by Ken Ferris)

Everything You Need to know About Michael Phelps, Most Successful Swimmer of All...