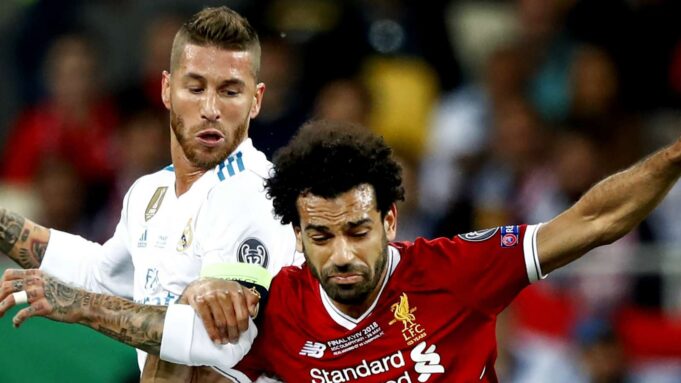 Real Madrid vs Liverpool is set to be one of the most thrilling match-ups in the 2020-21 Champions League, the two European heavyweights facing each other in the quarter-finals.

Both clubs have illustrious histories, and are among the most decorated across the continent. But perhaps the most memorable event concerning the two in recent years dates back to 2018, involving controversy between Sergio Ramos and Mohamed Salah.

But what exactly took place between the pair? Goal takes a look.

The two were involved in a brutal tackle inside the first half of the fixture, with Ramos seen having his arm locked around Salah’s shoulder and the pair subsequently flying to the ground.

Salah ended up having to leave the pitch in tears, unable to continue. The striker was later diagnosed with a dislocated shoulder, which forced him to miss out on Egypt’s World Cup group stage fixture against Uruguay.

The Egypt international was forced to watch his Liverpool side lose the final from the dressing room in a devastating 3-1 defeat.

Sadio Mane equalised in the second half after Karim Benzema’s opening goal, but two goals by Gareth Bale ensured a Real Madrid victory.

It was Real Madrid’s 13th win in the competition – a record.

Understandably, both Liverpool staff and players were left immensely frustrated by the situation, as had Salah remained on the pitch, the outcome of the final could potentially have been different.

“If you watch it back and you are not with Real Madrid then you think it is ruthless and brutal,” an incensed Jurgen Klopp told reporters after the game.

“I saw the ref taking charge of big games at the World Cup and nobody really thinks about that later. But in a situation like that somebody needs to judge it better.

“If VAR is coming then it is a situation where you have to look again. Not to give a red card but to look again and say: ‘What is that?’ It was ruthless.”

Ramos, however, will not be involved in the first leg of the quarter-final at the Bernabeu. He has been sidelined with a muscle injury in his left leg that was picked up during the March international break.

What has Salah said?
Though the incident still remains a sore point for Liverpool supporters, it is hopeful that both sets of teams have moved on from the controversy ahead of their Champions League quarter-final meeting in April 2021, the first time the two are to face each other following the 2018 final.

Liverpool went on to lift the Champions League just a year later, followed by a first-ever Premier League victory in 2020.

Real Madrid, meanwhile, have been successful on the domestic front.

Salah has stated that he is keen to put the events of 2018 behind him ahead of the Champions League fixture.

Article continues below
“That game is in the past, so I don’t think about [what happened with Ramos],” Salah told Marca.

“I’m thinking about the team. Everyone is focused on their team and everyone wants to win… that’s it. “Let’s just say that I have special motivation to win the tie and go through to the semi-finals. What’s going to happen now isn’t going to change the result of the final in Kyiv. That’s in the past.

“I think we’re both strong. Both teams have won their last two games in the Champions League. Both teams are prepared. It’s a special competition and both teams are doing well in it.”

Germany: How Hansi Flick finally brought back optimism to the National Team