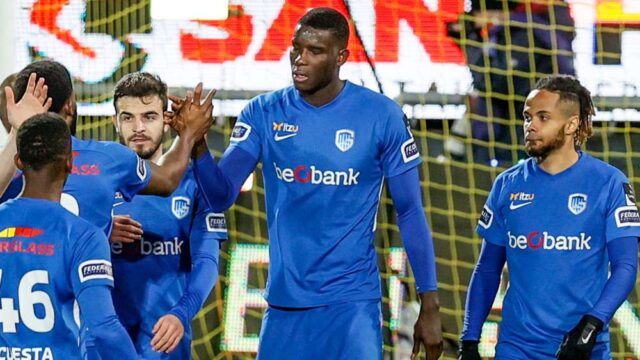 Nigeria forward Paul Onuachu extended his dominance in the Belgian First Division A goalscoring charts with a goal in Genk’s 3-2 victory over OH Leuven on Monday.

Onuachu’s late effort at Den Dreef took his tally to 26 goals after 31 league appearances – 28 goals in total this season (including two Cup goals) which makes him the highest scoring Super Eagles star in Europe so far this term.

The 26-year-old is enjoying his best season in front of goal since he kicked off his professional career in the Danish Superliga with Midtjylland nine years ago.

Over a week ago, Onuachu made a statement in Nigeria’s national team during the just-concluded international break after scoring a goal each in their last two 2022 Africa Cup of Nations qualifiers against Benin and Lesotho.

He scored the late match-winning goal in the Super Eagles’ 1-0 result against Benin in Porto-Novo and later sealed their 3-0 triumph over Lesotho in Lagos last Tuesday.

Onuachu’s heroics did not end with the international break as he scored what turned out to be the winning goal for Genk in Monday’s outing.

The former Midtjylland striker sealed maximum points for the visitors in Heverlee after goals from Kristian Thorstvedt, Theo Bongonda had put them ahead.

Article continues below
The Nigeria striker did not finish the encounter as he was replaced in the 89th minute by his compatriot Cyril Dessers – who has scored four goals in 26 league games this term.

Despite the victory, Genk remain unmoved in third spot with 53 points after 32 matches. They are a point behind second-placed Royal Antwerp and 20 points behind runaway leaders Club Brugge.

Onuachu will be expected to maintain his fine scoring form when the Smurfs host 15th-placed Sint-Truiden at the Luminus Arena on April 11.