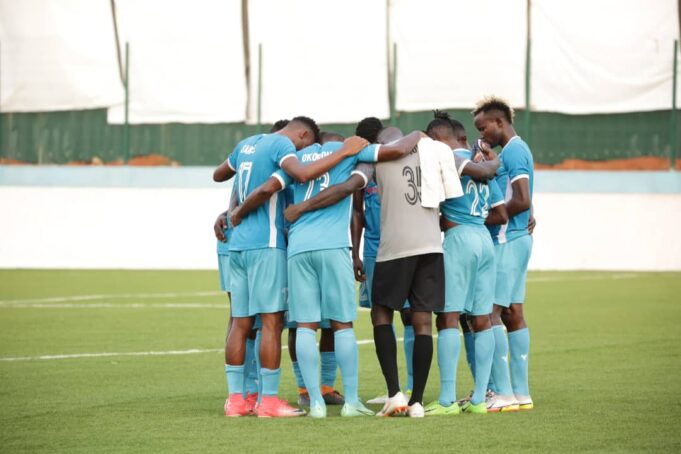 Heartland FC have stunned Enyimba who have had an indifferent season so far to win the Oriental Derby 1-0 in the matchday 15 of the 2021/22 Nigeria Professional Football League season.

The hosts, Heartland FC sought a penalty in the 17th minute but the referee adjudged that Chigozie Obasi made good contact with the ball and waved their penalty cries away.

With the game wearing on, the hosts started to attack more but Enyimba’s goalkeeper, Olorunleke Ojo was at hand occasionally to thwart goal-scoring chances.

In the second half, Enyimba again sought to punish their hosts for their lack of concentration but failed to use the goal-scoring opportunities which will be a huge concern to coach Finidi George.

Their prolificacy in front of goal was going to haunt them as Murphy Ndukwu gave Heartland the lead from close range after the ball bubbled about inside the box from a freekick.

With another defeat lurking, emotions started to fly as an Enyimba official on the bench was shown a controversial straight red card with Finidi making substitutions to at least get a draw but that failed as Heartland held to win the derby.

In the same vein, Remo Stars have ended their three winless runs to defeat Katsina United 2-0.

The hosts were desirous to secure all maximum points piled pressure on their visitors and that paid off just as the first half was about to end.

Tolulope Ojo headed Remo Stats into the lead after the visitors failed to clear their lines to bring some respite to Gbenga Odubote’s side.

The Blue Stars continued to pile pressure in the second half and were duly rewarded with a second goal in the 72nd minute from a penalty kick scored by Andy Okpe with the game ending 2-0.

Rivers United who is recently on top of the table also defeated visiting Nasarawa United 2-1 while Enugu Rangers and Kano Pillars played a goalless draw.

Meanwhile, the action continues tomorrow (Sunday) when Kwara United welcomes Niger Tornadoes while MFM FC will continue to fight their way out of relegation against Sunshine Stars.