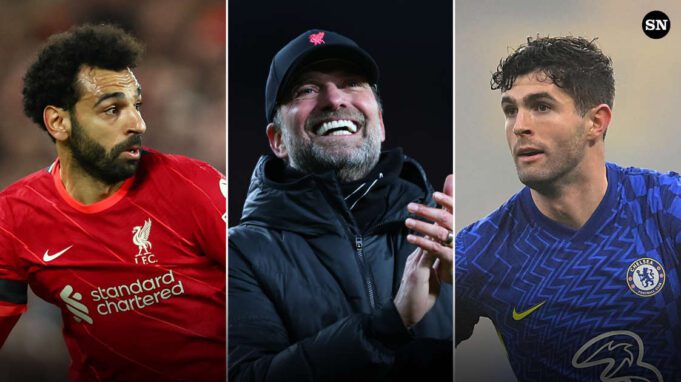 Liverpool were boosted by their two major signings of the 2021/22 season as the Reds landed the FA Cup and EFL Cup and narrowly missed out on the Premier League title and Champions League glory.

Defender Ibrahima Konate impressed after signing from RB Leipzig in May 2021 and Luis Diaz stole the show at times as the winger, who arrived from Porto in January 2022, made an immediate impact.

Manager Jurgen Klopp will be wary of ensuring his squad does not tread water ahead of the 2022/23 season, and Liverpool’s requirement for recruits may be escalated after the prolific Sadio Mane completed his move to Bundesliga champions Bayern Munich as expected.

The Sporting News is rounding up the key updates — all day, every day — below.

With less than a week left of the transfer window, Liverpool have let it be known that they are actively looking to sign a new midfielder.

The Reds’ starting trio of Jordan Henderson, James Milner and Harvey Elliott did not impress during the 2-1 defeat to Manchester United, but Klopp insisted he would not be rushed into trying to bring in reinforcements.

However, speaking ahead of his side’s Premier League clash with Bournemouth on August 27, Klopp accepted that plans had changed.

“We have had this discussion since it all started and I am the one who said: ‘We don’t need a midfielder’, and you were all right and I was wrong,” the Liverpool manager said. “But the specific point doesn’t change: we will do something but it has to be the right one.

“Curtis [Jones] comes back, Thiago [Alcantara] not too far off, Diogo [Jota] not too far off, Joel [Matip] comes back and that all eases the situation slightly. It would be great if no one gets on the [injury] list on the other side with a really intense time coming up. We are looking for it and if it is the right player, we need him, and if it is not the right player, we don’t need him.”

Liverpool have locked down Portuguese star Jota to a new long-term deal at Anfield.

The Reds didn’t confirm the length of Jota’s new contract, but The Guardian reports it will keep him at the club for the next five years.

Jota is currently sidelined with injury but has impressed since joining Liverpool from Wolves in 2020.

Fabio Carvalho completed his move to the club on July 3. The 19-year-old arrives from Fulham for a reported initial fee of £5m/$6m.

“It’s just an amazing feeling to be here at one of the biggest clubs in the world, if not the biggest. So, I’m just happy to be here and I can’t wait to get started,” he told Liverpool’s website.

“Once you hear that Liverpool are interested, there’s only one thought in your mind, which is to join them and try to be in and around the team. Hopefully I can achieve big things.”

Mohamed Salah at last ended the speculation over his future by signing a new three-year contract with Liverpool.

The Egypt star will now reportedly earn in the region of £350,000/$424,000 per week, which will make him the highest-paid player in the club’s history.

Salah’s new deal was confirmed after his agent, Ramy Abbas Issa, enjoyed a spot of mischief on social media with some “cryptic” posts about his client.

Christian Pulisic is a name on the transfer market after publicly expressing frustration over a lack of playing time under Thomas Tuchel at Chelsea.

That home could be Liverpool, with Sadio Mane on his way out and other squad players like Takumi Minamino and Divock Origi also departing.

A report by Christian Falk of German publication Bild on June 5 stated that the Reds are interested in the American international, kicking off multiple links between Pulisic and the Merseyside club.

UPDATE (June 22): According to CBS Sports reporter Ben Jacobs, Liverpool are considering the arrival of more attacking options, but Pulisic is no longer an option. “I am told it won’t be Pulisic,” Jacobs stated on social media.

After the arrival of Darwin Nunez, there may not be many minutes available for Pulisic at Liverpool, and he could end up with the same fate he suffered last season at Chelsea if he made the switch to Anfield.

Salah has stated his commitment to staying at Liverpool next season but negotiations over an extension to the Egyptian’s deal remain deadlocked on Merseyside. His current contract expires next summer, meaning he could enter the final year of his deal should a contract not be agreed to.

Liverpool’s financial structure has been cited as a key barrier to increasing Salah’s wages as part of a renewal, and the club are determined to maintain their position over any contract negotiations. However, Mane’s transfer fee could go a long way towards alleviating that situation.

UPDATE (June 19): The Mirror reports an impasse still exists between Liverpool and Salah. The Reds have a strict wage structure, careful not to go beyond the £220,000 per week paid to the club’s highest earner Virgil van Dijk. However, Salah (and Mane, previously) wishes to be paid like one of the Premier League’s best players, with wages similar to the likes of Kevin de Bruyne and Cristiano Ronaldo, who both make upwards of £400,000 per week.

It’s an understandable standoff from both sides, but the result could be a parting of ways come next summer if the gap cannot be negotiated.

UPDATE (June 5): Barcelona have ‘promised’ Mohamed Salah that he can move to the Camp Nou on a free transfer next summer if he runs down his contract at Anfield, as reported by the Daily Mirror.

Reds agree to Minamino deal with AS Monaco

The arrival of Darwin Nunez and links to other attacking players have made Takumi Minamino’s place at Liverpool clear.

The Japan international was nothing more than a squad player, and while he performed well in his chances on the field for the Reds, those chances were few and far between. With no view towards more playing time next year, Minamino may have found a new home.

Fabrizio Romano reported on June 14 that Minamino’s plan was to leave Liverpool this summer, and the club was open to exploring a move for the winger. Just days later, on June 22, The Athletic reports that Liverpool have agreed to a deal with French side AS Monaco for Minamino worth around €18 million (£15.3m / $19.4m), structured as €15 million up front plus another €3 million as add-ons.

With the Man City winger’s contract up next season and no work done to extend the deal, rumors have flown this summer about his future at The Etihad.

The former Liverpool winger left Anfield in 2015 to join Man City, a move which angered Reds supporters greatly. Seven years later, it’s thought that Sterling may wish for a return to Merseyside.

According to FootballTransfers on June 23, Sterling went so far as to ask for a switch back to Anfield, but that was reportedly “knocked back,” with no real details given on why Man City refused to explore a deal. If City get desperate to sell near the end of the window, this could be one to watch.

Below is the updated Liverpool first-team squad. New additions during the summer 2022 window are noted in bold: