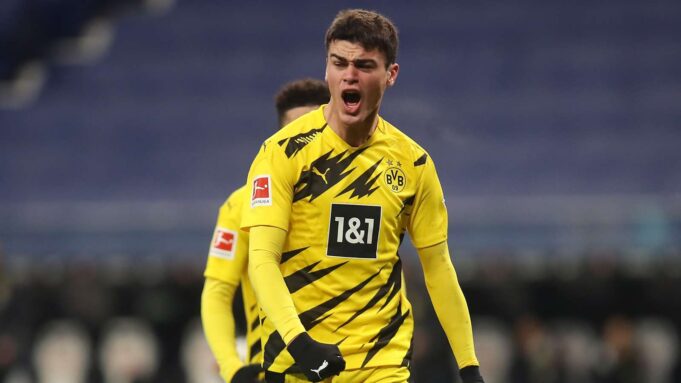 Manchester City’s scouting network and state-of-the-art Etihad Campus mean they can attract the best players from not just the local area but around the world.

Even with that in mind, Phil Foden will be the only academy player close to the starting line-up when City try to reach the semi-finals of the Champions League for just the second time in the club’s history.

There would probably have been another had England winger Jadon Sancho decided not to leave the Etihad Stadium as an 17-year-old to join quarter-final opponents Borussia Dortmund.

Faced with the choice of possible patient progress under Pep Guardiola or the promise of a fast-track to the first team in the Bundesliga, Sancho opted for Germany and it would be difficult to argue that he made the wrong choice.

But he’s not the only young Dortmund star to have passed up the possibility of a chance at City.

Like Foden, Giovanni Reyna grew up a City fan and, like Sancho, he faced a similar decision as a teenager between staying in the City set-up or taking his chances elsewhere when a number of top clubs took notice of his huge promise.

The son of former USMNT and City midfielder Claudio, the teenager was part of NYCFC’s youth academy when he started attracting the attention of clubs in Europe after he showed his potential for the under-15s national team.

With the help of a Portuguese passport, secured via his paternal grandmother, Reyna had the option of moving to Europe when he turned 16.

There was also the possibility of promotion to the New York City first team and it would have seemed a more natural move with his father the-then director of football operations at the MLS club. However, Claudio left the decision to his son.

“I’m a dad first, and I will support whatever he wants to do,” Reyna told Goal before his son’s move abroad. “The thing about a player at 14, 15, 16 is they’re going to make their own decision. They’re going to take everything in and see.”

Reyna opted to follow in the footsteps of his father, who had moved to Germany as a youngster having spells with Bayern Leverkusen and Wolfsburg.

He was encouraged by the development of promising young US star Christian Pulisic, who was starting to break into the Dortmund side as an 18-year-old.

The teenager decided to make the same move and while he had to grow up quickly on his own and more than 3,500 miles away from home, it’s another decision that has paid off.

Still only 18, Reyna has made 54 appearances for the Dortmund first team already as well as winning four international caps and scoring twice.

Playing with fellow youngsters Sancho, Erling Haaland, and Jude Bellingham, it has helped cement the German’s club reputation as a place for blossoming talent.

“I think I was 14 at the time, or 15, when I realised that there was a possibility to go to Europe and yeah, I just came here and Christian was here at the time and everything he was doing at the time put it in my head that I could do great things here,” he said last year.

“Everything about Dortmund and the opportunities they had, giving young players playing time, playing in the Champions League and all of the biggest competitions. They made it feel like home from day one, made me feel like I was really wanted here, so it has been a perfect decision so far.”

Still, having been part of the City Football Group from such an early age, it feels like another missed opportunity for City.

Born in Sunderland when Claudio was playing for the Premier League side, the family to move to Manchester when he switched to the Etihad Stadium and Gio spent the early years of his life with a Mancunian accent, although that faded when they moved back to Bedford in New York.

However, Reyna and brother Jack remained City fans. He has spoken touchingly about Sergio Aguero’s famous title-clinching moment being special – when his sibling was ill with cancer that was to tragically take his life just weeks after.

Since then, Reyna has become one of the most exciting young talents in world football. With pace, goals and the quality to provide a killer pass, the excitement around Reyna is growing – even in a squad crammed with huge potential such as Dortmund’s.

A first visit to the Etihad on Tuesday night gives him another opportunity to take a big step in a career which is on a trajectory to the very top.

“He did some crazy things” – West Ham’s new signing discloses admiration for Nigerian...

At last ‘El Gato’ goes back to the French National Team