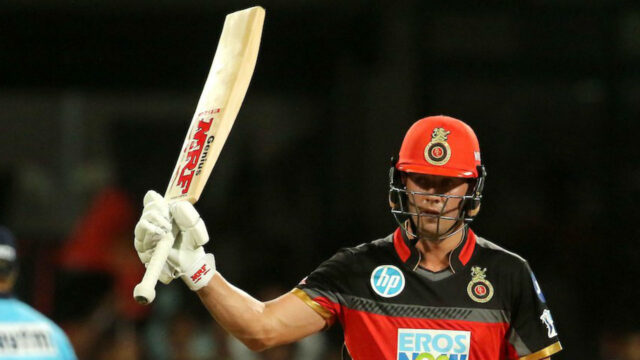 Ex-South Africa captain AB de Villiers has made public his retirement from cricket.

Batter De Villiers, 37, retired from all forms of international cricket in 2018 but continued to play in Twenty20 franchise leagues around the world.

His last match was in October for Indian Premier League team Royal Challengers Bangalore, who he represented for 10 years.

“It has been a wonderful journey,” expressed De Villiers.

“Ever since the backyard matches with my older brothers, I have played the game with great pleasure and unrestrained zeal.

“Now, at the age of 37, that flame no longer burns so brightly.”

He averaged more than 50 in both Test and ODI cricket, scoring 22 centuries in the former and 25 in the latter.

De Villiers made his international debut in the Test series against England in 2004 and made his first ODI appearance against the same opposition a year later.

He kept wicket on occasion and captained the Proteas in all three formats – most notably as ODI captain between 2012 and 2017 when he led them in 103 matches.

Cricket South Africa held talks with De Villiers about coming out of international retirement to play in the recent Men’s T20 World Cup but he decided against returning.

He had not played first-class cricket for domestic side Titans nor any List A cricket since 2018, focusing instead on T20s.

As well as at RCB, he also played for Middlesex in the T20 Blast, Lahore Qalandars in the Pakistan Super League, and Brisbane Heat in Australia’s Big Bash League.

“Cricket has been exceptionally kind to me,” added De Villiers.

“Whether playing for the Titans, or the Proteas, or RCB, or around the world, the game has given me mind-blowing experiences and opportunities, and I will always be grateful.”

De Villiers achieved 313 runs at an average of 31.3 in this year’s IPL, where RCB were beaten by eventual runners-up Kolkata Knight Riders in the eliminator game.

‘The best player of our times’ – reaction

India captain and RCB team-mate Virat Kohli: “To the best player of our times and the most inspirational person I’ve met, you can be very proud of what you’ve done and what you’ve given to RCB my brother. Our bond is beyond the game and will always be.

“This hurts my heart but I know you’ve made the best decision for yourself and your family like you’ve always done. I love you.”

Former South Africa captain Faf du Plessis: “Well done on a special career. I’ve been very lucky to be on the same cricket field as you. The game will not be the same without you. The greatest player I have played with.”

England wicketkeeper-batter Jos Buttler: “What a player! I was one of so many who would turn on the TV just to watch you bat. Enjoy retirement, what a career.”

Australia all-rounder and RCB teammate Glenn Maxwell: “Glad I got to share the field with one of the greatest players of all time, and an amazing human too! Changed cricket forever.”

England batter Sam Billings: “The best I’ve ever seen, and someone who I’ve always looked up to! Took the game to another height single-handedly.”