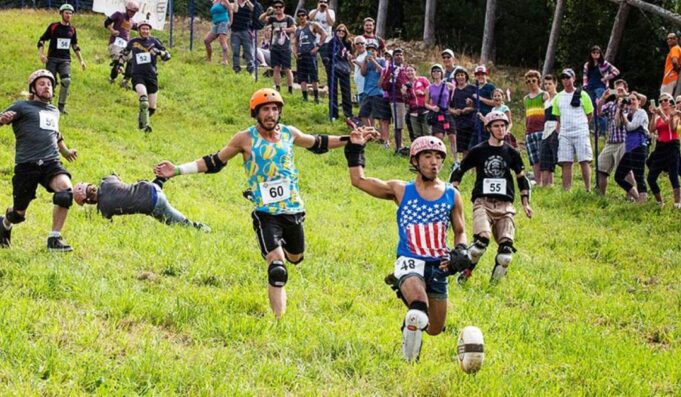 Are you searching for a sport that is beyond the ordinary? What about these 5 weird sports to give you a new challenge.

Some inventions are very huge, such as the internet, the flushing toilet, and the wheel. Moreover, there are some other inventions that are not actually useful, such as the sport where participants do chores up a mountain, or the one that asks its contestants to count livestock. Yet, in as much as these sports aren’t as useful as the internet or the wheel, they are not completely useless and their eccentricities help to make lots of peoples’ days a little brighter.

Below we share with you five of these weird Sports:

Definitely bouncing around on a trampoline can’t be improved? Well, think again. Bossa ball is a great, fast-paced sport that was invented in Belgium. The sport involves volleyball, football, gymnastics, and capoeira and is played on a trampoline, using a ball. The court is bright, big, and inflatable so that players are safe when jumping to the fantastic heights they have to. Teams are made up of three to five people and the aim of the game is to ground the ball on the opponent’s side of the net. To do this, players can use any parts of their body to return the ball and they all go to extreme, gravity-defying lengths to do so.

Even though is a bizarre sport, Bossa ball is by no means obscure. There are clubs and events worldwide and big-name brands have become involved in the sport, including Pepsi, Haribo, and Adidas. Although the novelty and high-energy aspects of the sports appeal to plenty of people, the party atmosphere related to it is one of its most attractive spots.

Extreme ironing was created in 1997 by Phil Shaw. The sport basically involves doing the most boring chore in the world – ironing – in a remote or dangerous location. Those who take part in extreme ironing are called ironists and spend their free time lugging their ironing boards and irons around the globe, whilst their loving partner carries a camera (and hopefully a first aid kit) in an attempt to capture their daredevil ironing stunt. Some of the best ironists have been photographed pressing their clothes up a mountain, in a waterfall, underwater, the motorway, hiking, rock-climbing (dry and in snow), on top of a cow, or even strapped to the back of a New York City yellow cab.

If you’ve ever seen or held a ferret you will comprehend why this is one of the world’s craziest sports. If you have not, let us remind you that ferrets are strong and vicious when scared. They also have sharp teeth, razor-like claws and they stink. With these facts in mind, now imagine thrusting a pair of hungry ferrets down your trousers, which have been tied at the bottom, and now, with the ferrets crawling around your crotch, your belt has been tightened. This is ferret legging.

The reason for the game is to keep the ferrets in your trousers for the longest time feasible. Recently, the ferret legging record is held by Frank Bartlett and Christine Farnsworth who managed to withhold the biting and scratching of the ferrets for a time range of five hours and thirty minutes, and the former world champion, Reg Mellor, wore white trousers to display his blood-stained glory to the crowds watching, we don’t think we’ll be exploring this one in a haste.

Joggling in itself is quite a strange sport, yet combine juggling with jogging and you have yourself one of the world’s weirdest sports ever; joggling.  There are three types of joggling. Speed jogglers aim to cover a distance whilst running and juggling in the fastest time. Error-free jogglers aim to run and juggle for the longest time without making a mistake. Lastly, there are the trick jogglers who try to do as many juggling tricks as can be done whilst running a mile (1.6km).

Australia is a nation known for its sport. Yet, what about all of the uncoordinated sports haters in Australia? What do they get up to? Well, it seems like the sport for all those ungainly, clumsy Australians is sheep counting.

In as much as skill is required to be a decent sheep counter, physical prowess is not. Fundamentally, what occurs is approximately 400 sheep are released from a pen and 10 contestants have to try to rightly count them as the sheep run past. This sheep counting championship has grown out of a profession, which many Australians do for a living in the sheep auction yards. As an important task, it can drive the average individual almost mad, but as a challenge, it brings status to those with an open eye.

Chelsea is Eager To Sell Werner This Summer

Leicester blast two-goal lead to compete with Napoli in the thrilling...