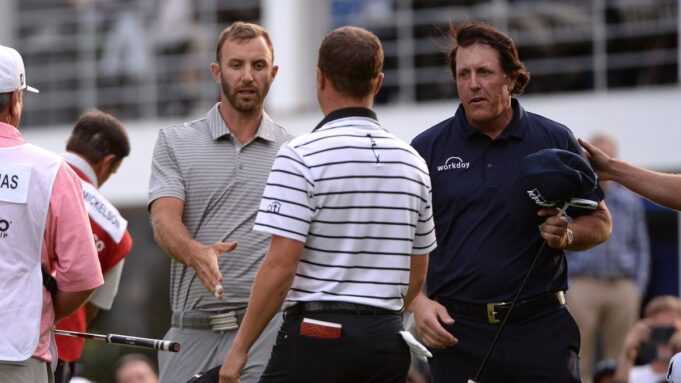 Comprehensive plans for a £250m Premier Golf League targeted at transforming the professional game are to be revealed later this week.

According to BBC Sport, the global competition is scheduled to begin in January 2023 and would include 18 tournaments targeting the top 48 male players in the world.

A dozen of those events would be staged in the United States with the others “chasing the sun” around the world. Each competition would be worth $20m (£14m) with $4m going to the winner and last place picking up $150,000.

By way of comparison, the biggest purse on the PGA Tour for a single event is $2.7m from a $15m prize fund at the Players Championship.

There would be a team element with team principals selecting which scores from individuals from the four-man lineups would count.

There are also plans to involve the leading women’s tours and to plow 50% of the spoils back into “the golf community”.

Those backing the project, run by the British-based World Golf Group, are worth in excess of $20bn according to boss Andy Gardiner.

A rival Saudi-backed Super Golf League (SGL) was the talk of the sport during the recent US PGA Championship at Kiawah Island. PGL’s plans, which are entirely separate, look likely to stimulate conversation at next week’s US Open at Torrey Pines.

Speaking particularly to BBC Sport, Gardiner said: “The team is ready to go.

“We’ve used the last eight months to bring in externals to check through every single piece of the model to make sure the events of the last 12 months with Covid haven’t changed our thinking.

“The January 2023 date right now is entirely feasible. We will see how the conversations go with the community that we want to embrace.”

That “community” includes the PGA and European Tours, who have formed a strategic alliance to fight off the threat of projects such as the PGL and the SGL.

But Gardiner is convinced his project offers golf its best opportunity to increase fan interest in the sport. His organization has no desire to replace the majors and Ryder Cup at the pinnacle of the game.

Players have been pressurized with lifetime bans from established tours and potentially the Ryder Cup if they were to defect, but Gardiner insists such punishments would be unlawful.

“Think about the individual’s right to work,” he said. “Thomas Jefferson, the declaration of independence talked about life, love and the pursuit of happiness and that includes the ability to work as you want to.

“Individuals shouldn’t live in fear of exclusion of not being able to work. Competition law exists to ensure there is a level playing field and everybody in these circumstances can compete for the services of the best players in the world.

“Different bodies create their own sets of rules to protect what they have and then it’s a question of whether the rules that they have in place are fair and that’s when you look at the relevant law.

“Imagine the reaction of the sponsors and the broadcasters if the world’s best players were all of a sudden banned. Common law in the US says that is a punishment, that’s not protection.

“You’ve got to allow people to live their own lives. That’s why I’m confident.”

But he admits there have been no discussions with the American-based PGA Tour. He also revealed that his organization came close to a deal with the European Tour before the two established circuits formed their strategic alliance last November.

“It would appear to be a long way away,” Gardiner said of the prospects of joining forces with the main tours.

“It didn’t appear to be that far away back in November when we were talking to the European Tour.

“There have been barriers, but there is no need. I’ve listened to players talk about being banned, they will not stop the players, I can assure them of that.”

And he believes the offer of giving 50% back to the golf community, including the tours, will help preserve the game’s pyramid which could then allow players to progress to his lucrative circuit.

“We propose to gift half of the league,” he said. “That could well involve all professional golfers be they touring or non touring, men and women and quite possibly the charities that operate existing events and some fans.”

He wants talks with the tours and believes they can be concluded by September this year. “I hope it will be a two or three-month consultation period with the bodies that represent the community,” he said.

Tournaments would be staged with shotgun starts, played over three days in five-hour windows with no cut to make them as attractive as possible to broadcasters. Each venue would have major and Ryder Cup-sized infrastructure costing $13m.

The PGL is keen to incorporate women’s events the week prior to the men’s tournament to creating a “festival of golf” at each venue. There would be junior competitions with team branding throughout.

“This started off as a simple proposition which was to make professional golf as good as it could be and better for the game,” he expressed.

“We’ve been listening to stakeholders over the last three years and the idea of sharing with that community is where we began and it is where we’ve returned to.

“This is the blueprint, we are the catalyst if nothing more, but we genuinely believe that this will bring more fans to the game, will make the game as robust as possible for decades to come.

“It will thrill and excite fans because that’s what we are when it comes down to it.”

Gardiner says his group has listened to concerns raised by players over travel and world ranking points, which is why there will now be 12 US-based events rather than the original plan for 10.

No player will be asked to sign up until fears over bans, and ranking points have been addressed.

“In the discussions, we have had with players–two things came up,” said Gardiner.

“One was would you put purses up to $20m per week? And we went away, redid our numbers, and said yes.

“That is about fairness because when you create a league it is about how you distribute the revenue and it is the stars that generate the revenue. They are worth $20m purses as simple as that.

“They also wanted us to look at the ban threat and the prospect of them not getting world ranking points as part of the league.”

Gardiner is convinced his events would be able to carry world ranking points which are one of the main passports into the four men’s majors: The Open, Masters, US Open, and US PGA Championship.

Players may also need reassurance that a start-up concern such as this can live up to its massive claims on prize money and infrastructure costs.

“Our business model, you can imagine the number of banks that have been through, it’s been done to death,” he said. “We know it inside out and it’s literally a case of switching it on.”

Now he wants the golfing world to examine the proposals which will be made public on the PGL website this Wednesday.

The PGA Tour is sure to want to protect what is recently the biggest and most lucrative circuit in world golf.

That will remain the case unless leading stars such as Rory McIlroy, Dustin Johnson, and Bryson DeChambeau are convinced otherwise. They will impact how the tours decide to respond.

Gardiner is undeterred. “Have the discussion, talk to us,” he expressed.

“Don’t throw up barriers. Is this better for the game? Let’s listen to more people, listen to fans. You can go for years running away from the conversation.

“We know what’s held it back and these conversations might be the help that golf needs.”